Sooner or later, I had to see it: the Baltic Sea, in its winter, white glory that I love so much. This time I ventured further north than Kihnu, to Muhu e Saaremaa, the largest of the Estonian islands and thought to possibly be the Ultima Thule.

Saaremaa and Muhu, nested together but profoundly different: Muhu is fully vested in its identity as an island. The manager of the farm where I spent the night (more on this below) has been living in Muhu for years and is married to a Muhu-born man, but she candidly admitted she’ll never be considered a local. Her husband has basically lost that right too, by studying and living in Tallinn for a few years; Muhu only counts those who never abandon it among its own.
Saaremaa is different: the largest island in Estonia, it also has what is basically the only real city amongst them, Kuressaare. Saaremaa people feel islanders – and they are – but the tones are much more playful, as exemplified by the game of tug of war played by Saaremaa and the island further north, Hiiumaa, a few years back (if you’re wondering, no one won – the rope broke). Saaremaa is a popular summer and winter destination among Estonians, due to the large presence of spas and saunas, but a foreigner is still considered a bizarre sight in January especially if she’s not Russian.

Both islands are easily reached from Tallinn via a direct bus that takes about 3 hours to Muhu (Liiva) and 4 in total to Saaremaa (Kuressaare). The bus gets loaded onto a ferry so you don’t have to worry about changes, but remember you can’t spend the half-hour ferry journey on the bus. The ferry is large and modern and has a bar and restaurant in addition to loos and a lounge area. A bridge between the mainland and Muhu has been discussed for years but it has its opposition, especially on the island. Muhu and Saaremaa are connected by a land bridge. 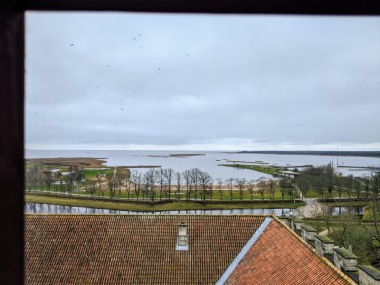 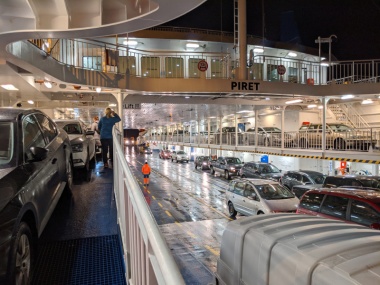 If driving through Muhu without leaving the main road, you might think there’s little to see on the island except for the town of Liiva. 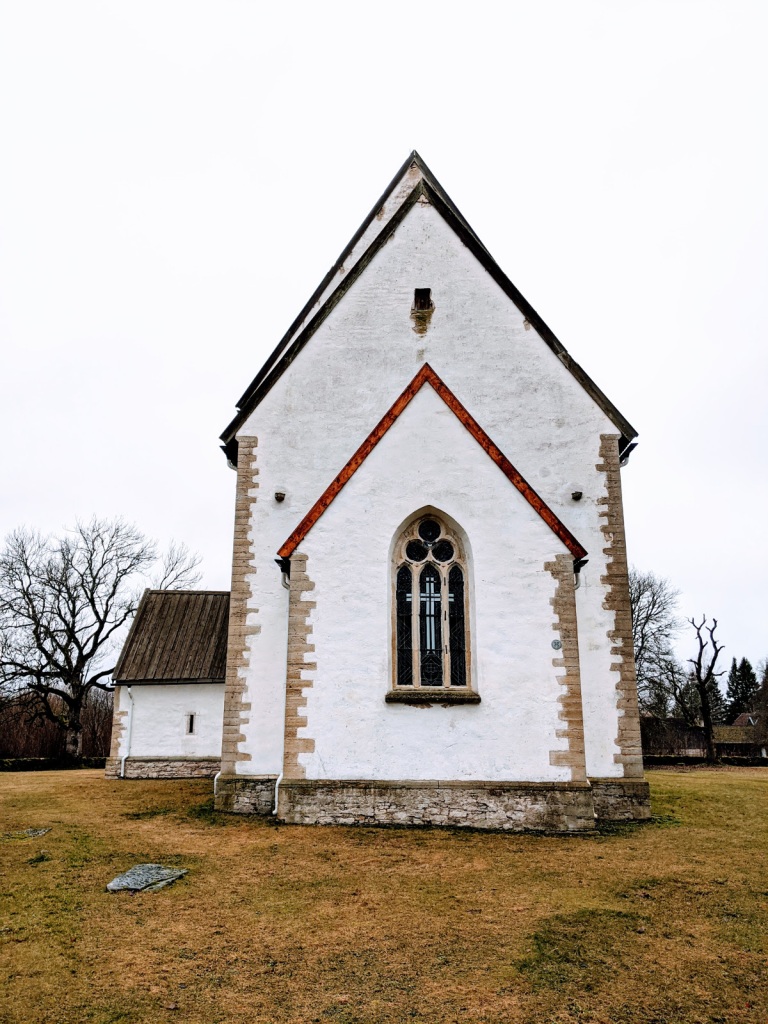 And you must stop in Liiva, if nothing else to see its 13th-century gothic church of St Catherine (Katariina kirik), white and graceful on a field burned by frost, surrounded by black trees. The polychrome mural paintings inside, influenced by the Byzantine tradition, are stunning. 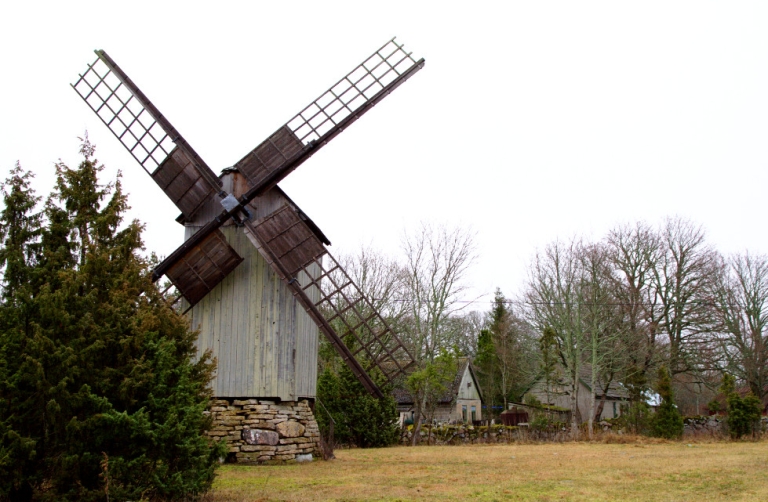 Yet, Muhu comes to life in the fishermen’s villages off the main road, behind the pine forests, in its farms with bright green doors and the old flour mills. Koguva, in the north west, is the most interesting of such villages: its local museum (Muhu Museum) is as amazing as I’ve found similar institutions in Estonia to be. It is based in three historical buildings, which include a farm and a museum. And remember the bright red skirts women wear in Kihnu? Muhu has similarly beautiful skirts in shades of orange and yellow, and is world-famous for its sophisticated embroidery traditions (especially blankets and shoes). 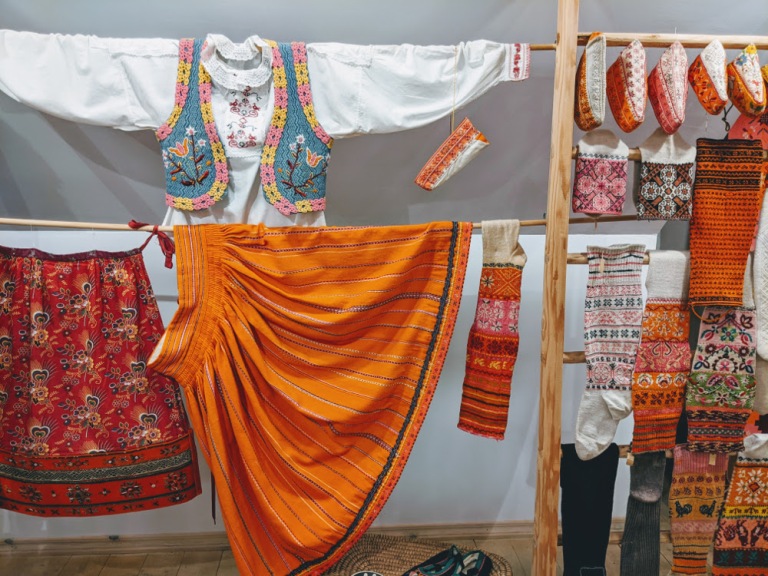 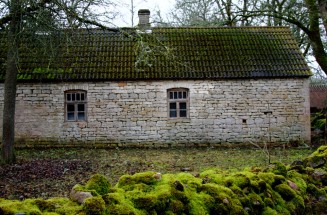 Even though I ended up loving it in its own right, visiting Muhu came as a natural addition to visiting Saaremaa, my main destination. I was hoping to see a snow-clad Kuressaare castle. But very little snow fell on Estonia this winter, especially in January. Not even days of frozen rain could put a dent in my love of this country, however – if anything, it was a special experience that gave layers to it to see Estonia, which I have known as luminous in the summer, in a new way: wrapped in a gleaming silver light.

Of course it’s a lot easier to appreciate Baltic winters if you can spend the long dark hours alternating between saunas and pouring buckets of freezing water on yourself, sitting next to young Estonian couples and burly Russian men, with a healthy dose of sel’fwhipping with birch branches. (Sipping on a local IPA in the bubbly pool helps, too).

But it’s not just indulgence. Bathhouses / saunas (albeit lesser known than their Finnish equivalent) are prevalent to Baltic culture. Many rites dating from the pre-Christian era, which then survived openly or privately, are connected with the goddess known as Pirts Māte, the “mother of the bathhouse” (Baltic mythology is rich in “mothers”, especially in Latvia). Bathhouses where a place for births and where newborns spent the first week of their lives with their mothers; hot water and birch branches were left as an offering to the “mother of the bathhouse”; the bodies of the dead rested in the bathhouse before their last rites. It’s not uncommon, in Baltic folklore, for meetings to happen in the bathhouse; at Saule’s wedding (the goddess associated with the sun), the gods met in a bathhouse. (How’s this for cool: historians of religions think the sun tends to be feminine in northern European cultures because the sun was gentle and gave life).
It felt even more special on an island, and Estonians definitely have a particular appreciation for the idea of islandness. 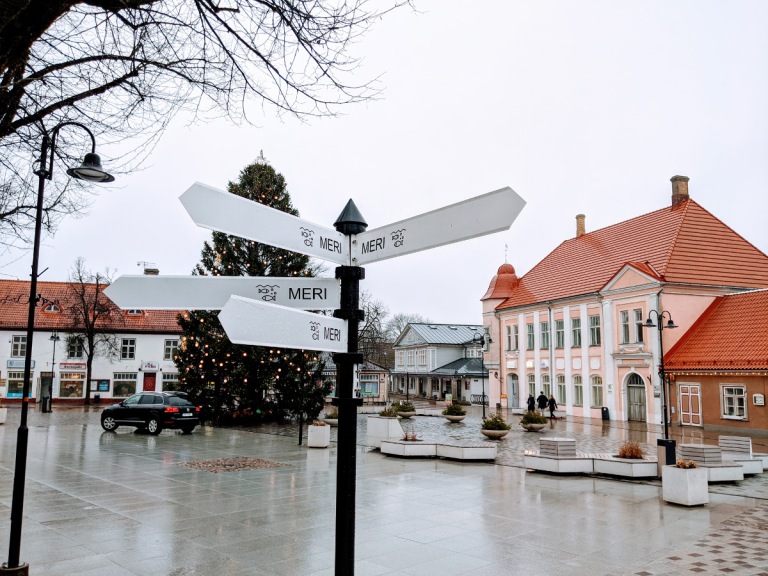 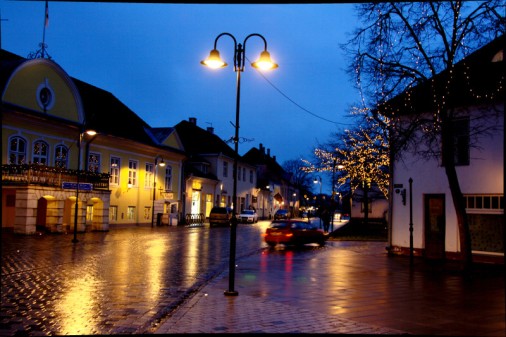 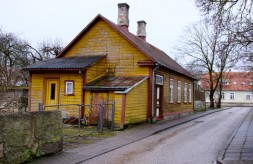 The castle in Kuressaare is full of surprises, starting with what you can do in it: get married (not that uncommon), enjoy the sauna (fair enough, this is Estonia) or shoot a 220-year-old cannon named Kotkas (100 euros a shot, people, make it count).

In addition to shooting cannons, you can visit the historical museum housed in the castle; set aside at least 3 or 4 hours for your visit because the museum is that good and that big (although not all panels and labels are available in English). Just like in the rest of the Baltics and in Latvia, especially, recent history in a strong presence in contemporary society. Saaremaa was the last territory to see Russian troops leave in 1994, much later than the rest of the area. The museum also holds fascinating photographic collections, art objects and paintings from as early as the early modern era, an impressive amount of objects and clothes from throughout the 20th century, and Soviet jokes printed on staircase steps. 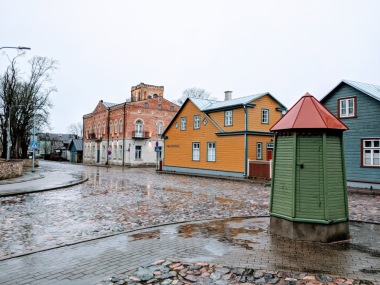 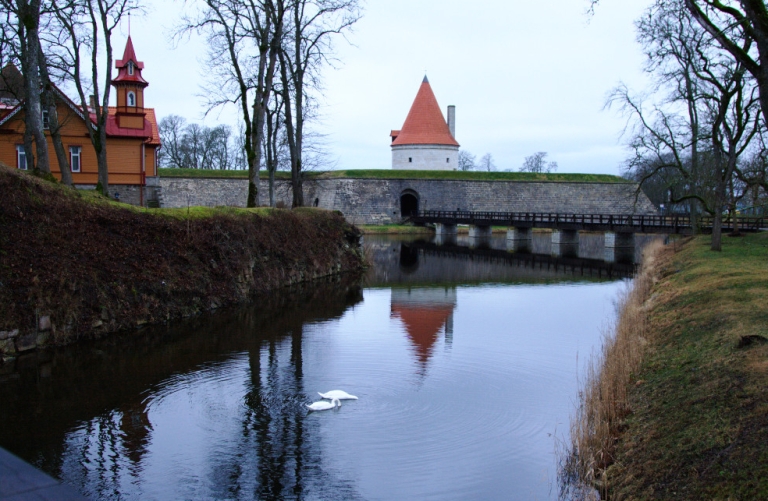 Because the island is large-ish, there is quite a bit to see in Saaremaa: it definitely helps to have a car, but you can also take advantage of local buses (in the summer, mostly) or books a tour with Arti at Active Life and support a local business. (Bus timetables are available at tpilet.ee or better peatus.ee for local buses; ferry timetables can be found on Veeteed.) The forests along the roads, hiding and revealing bits of the sea at every turn, are a song for the soul. You can spot wildlife fairly often (including, or so I’ve heard, a bear who made Saaremaa his home for a couple years before swimming back to the mainland).

One of the best experiences you can have in Saaremaa is visiting its impact crater lake, Kaali crater (Kaali kraater), about 30 minutes from Kuressaare. I’m not sure the photos make this place justice: walking up the sides formed at the time of impact is an awe-inspiring thing. As the lake comes into view, you are perfectly positioned to imagine how terrifying it could have been to watch the sky crash into the earth, about 4,000 years ago. Unsurprisingly, evidence of centuries if not millennia of rites have been found in the area, which was still considered sacred in the Middle Ages. Fortifications were built and sacrifices performed. Some historians also think Kaali crater to be the Thule written about by the Greek geographer Pytheas in the 4th century BC (which later became better known as “Ultima Thule”, in Vergil’s words). Pytheas told how the local population showed him the place “where the sun went to sleep” (others identify Thule with Norway or the Faroe Islands). Estonian folklore also have stories about the time when “Saaremaa burned”.

At any rate, the lake is guaranteed to render you speechless – it certainly did with me, as I looked down onto the full body of water (often not quite as full in the summer), in the sleet. The main crater is also surrounded by a handful of smaller craters in the area.
By the lake, in addition to a primary school, sit a small museum and a restaurant.

On the northern coast of the island, Panga Cliff looks over the silver and extremely quiet sea (ships give it a wide berth). Under the watchful eye of a Soviet lighthouse, juniper bushes and forests marked by WW2 trenches cover the cliff (be careful in Estonian forests – unexploded WW2 devices are not an uncommon find). 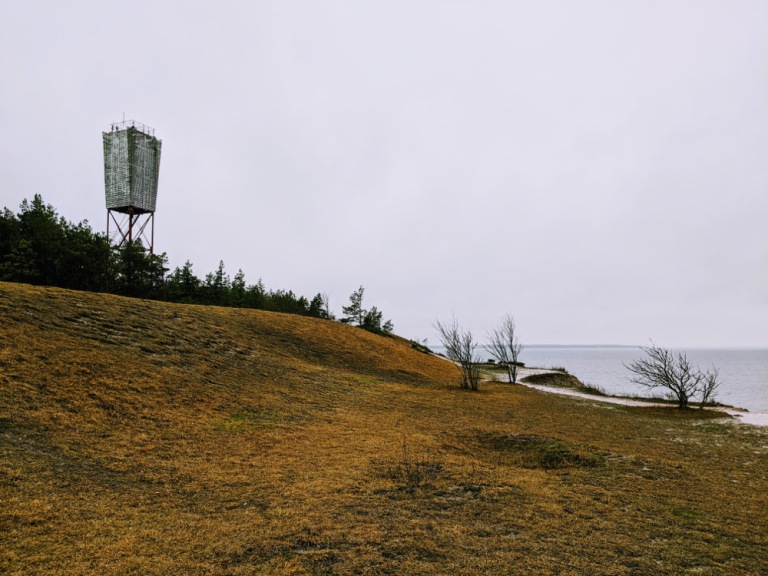 If you have more time than me or own transportation, take a couple hours to visit Kiipsaare Lighthouse in the north west of Saaremaa. Built about 90 years ago, the lighthouse was then on dry ground and straight, but it started leaning more and more visibly and today sit in the sea, looking very odd about 50 meters away from the coast.

Where to sleep in Muhu and Saaremaa

This one’s easy. In Kuressaare, you can have your pick of ho(s)tels; I strongly recommend choosing one with a spa, especially if you’re visiting during the colder months, when you are more likely to find a good offer too. I stayed at the Grand Rose Hotel, which has an impressive range of saunas and a spa.

In Muhu, I cannot recommend Vanatoa Farm enough. It’s in a beautiful location hidden in the forest but steps away from Muhu Museum in Koguva as well as from the sea, and the rooms are all decorated with local embroidery. The area is so quiet no doors get locked at night, and the most dangerous creature to walk up to the door are wild hares. The managers (the owner’s a Swedish guy whose wife was Estonian) can also feed you and take you to/from the bus station in Liiva for a few extra bucks.